Scott Wilson, who plays Hershel in The Walking Dead (Season 2 and Season 3), started his movie career over 40 years ago as a serial spree killer in In Cold Blood opposite Robert Blake.

His other movie credits will astound you (to name a few): The Last Samurai (with Tom Cruise and Ken Watanabe); Monster (with Charlize Theron); Pearl Harbor; G.I. Jane (with Demi Moore); Dead Man Walking (with Susan Sarandon and Sean Penn); The Right Stuff; The Great Gatsby (1974); and In the Heat of the Night to name just a few.

Even now, at age 70 he has no plans to slow down or retire. He lives in Los Angeles with his wife of 32 years. He’s won a handful of awards including a Screen Actor’s Guild award in 2007. 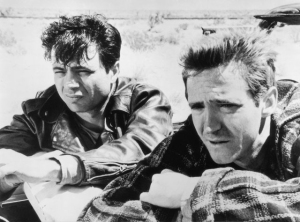 Scott Wilson (right) played opposite Robert Blake in the movie In Cold Blood, one of Wilson’s first film roles.