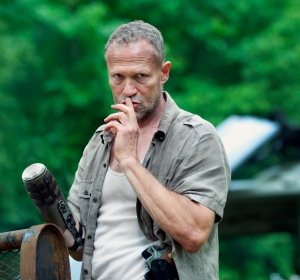 It’s Saturday, March 30, and if you haven’t seen last Sunday’s Walking Dead, then I have bad news for you, Merle Dixon has been killed … twice. His human form was killed by The Governor and his zombie form was killed by his brother Daryl.

Merle has been the antagonist in TWD for, well, all three seasons. In Season 2, he was even a pain in the butt when he showed up in Daryl’s mirage. So he even knew how to antagonize when he wasn’t even a regular cast member.

But he really showed his ass in Season 3, he and his stump known as “Little Merle.” If you haven’t seen The Talking Dead from last Sunday, then you’re really missing out. Michael Rooker, Greg Nicotero, David Morrissey and Reggie Watts all joined Chris Hardwick to talk about “This Sorrowful Life.”

Greg Nicotero is a great guest on any media outlet. He’s very informative and shares with “you” the ins and outs of episodic direction. I’ve never seen an interview with any director that’s so revealing on why he does this or does that.

Click the link above to read a list of media accolades and links to all things Walking Dead. Entertainment Weekly talks to Norman Reedus about Merle’s death and he tells The Hollywood Reporter that he “wants a ferocious revenge” for Merle’s death plus many, many more.

The Zombie Apocalypse continues through Sunday on AMC, as they show all three seasons leading up to the Season Finale of Season 3, which looks to answer all those questions Chris Hardwick and all the fans of TWD have been asking all season:

Will Rick stop seeing ghosts by Season 4 or will the prison dwellers request an intervention (or a séance)?

Will The Governor be re-elected now that he’s put the citizens of Woodbury in danger of being taken “prisoner?”

Will Glenn and Maggie have a ceremony or just exchange rings?

Who will emerge as the new leader @the Prison?