Dispatches from the Set – Mike Satrazemis Director of Photography. 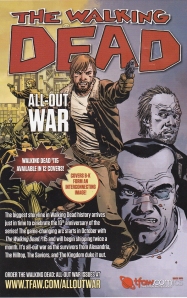 A recent sales flyer from tfaw.com

I hope you enjoyed the 4+ minute Comic-Con trailer. I’m so anxious for Season 4 to start, I had my own Walking Dead marathon several weeks ago. I was up in Door County over the July 4th holiday when AMC held their Walking Dead marathon and didn’t realize that my DVR had recorded all the episodes.

I bought Season 1 and Season 2, so I wasn’t worried about it, but was overjoyed when I realized that my DVR had actually recorded all the episodes, including the black and white Season 1 episodes, which I found extremely hypnotic to watch.

So I watched the black and white episodes and deleted the rest of Season 1 and 2 and took my time and reviewed Season 3 at my leisure. I decided the episode where Merle is shot by the Governor and Daryl goes to find him and discovers he’s turned into a zombie is one of the most powerful of Season 3, only topped by little ass kicker’s emergency birth.

I recently received #113 of the Walking Dead comics, anxiously awaiting #115. I get both the comics and The Walking Dead monthly magazine from http://www.tfaw.com (Things from Another World). #115 will be available in 12 covers. The biggest storyline in Walking Dead history will be arriving just in time to celebrate the 10th anniversary of the series (this is the comic book I’m talking about now). When #115 ships in October, it will increase comic book delivery to twice a month, instead of just one Walking Dead comic a month.

In the comic world, it’s all out war as the survivors from Alexandria, The Hilltop, The Saviors and The Kingdom duke it out. Covers B through K form an interconnecting image! And realize this Walking Dead fans, many of those who have perished in the television show are alive and well in the comic book world.

So if you want to keep your Walking Dead hunger fed, consider feeding it with comics and the monthly magazine (no pun intended).

Here’s a trailer for you from Comic-Con. At almost 4-1/2 minutes long, it will certainly whet your appetite for what’s to come.

The huge venue – Comic Con at San Diego is over for the year, but there’s still time to attend some of the smaller ones.

Here’s a great website that lists upcoming cons held all over the planet into 2015 and rates them on a sliding scale: i.e. Meta Con in Minneapolis, MN being held over Labor Day weekend has a rating of 8.2.