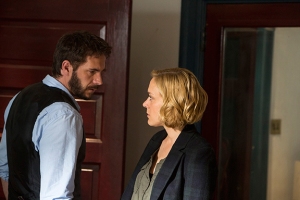 James D’arcy and Chloë Sevigny star in “Those Who Kill” from A&E.

Here it is now, March of 2014, and new episodes of the second season of Bates Motel have begun, and my trusty DVR has recorded them, but I still haven’t got caught up with the first season.

Last night I watched the first episode of Those Who Kill with Chloë Sevigny and James D’arcy and was blown away. Tonight I promptly deleted Bates Motel off by DVR and canceled the record order in my series manager.

I figured if I haven’t gotten around to watching Bates Motel by the time the second season has started, then it just isn’t for me.

In Those Who Kill, Sevigny plays Catherine Jensen, a new to homicide detective who has paintings of serial killer’s homes in her apartment. Not too creepy, they are well done paintings.

James D’arcy plays Thomas Schaeffer, a forencis psychologist who’s not on the best of terms with the police department, and Jensen goes to him to get insight into her cases.

They both find themselves deeply involved in Pittsburgh’s serial killers, each in a different way and judging from the first episode, that may do more harm than good.

A&E will no doubt replay the first episode so if  you get a chance, you should DVR it and then set your DVR to catch it on Monday nights at 9pm.