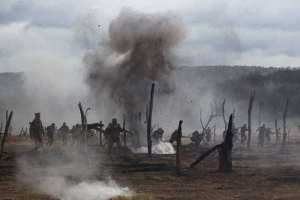 The six-hour The World Wars special event series premieres tonight on History® at 9pm/8pm ET,  continues Tuesday, May 27 at 9pm/8pm ET and concludes Wednesday, May 28 at 9pm/8pm ET. Later this summer, the 3-part series with premiere on H2 and more than 160 countries across the globe will have an opportunity to see it.

The story tells the history of the World Wars through the eyes of the most powerful men: Roosevelt, Hitler, Patton, Mussolini, Churchill, Tojo, DeGaulle and MacArthur. These men held the fate of humankind in their hands. This event series examines the two world wars as one contiguous timelines, starting in 1914 and concluding in 1945, with these unique individuals coming of age in World War I before ultimately making some of the toughest decisions in the history of mankind in World War II.