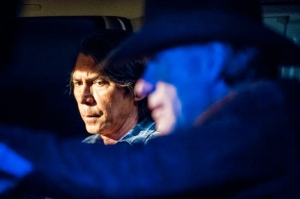 If you’re not caught up on your Longmire episodes, you better get crackin’, because the season 3 finale aires Monday, August 4 at 9pm CST. [spoiler alert]

There seems to still be a couple of things up in the air. But between Henry and Walt they’ve been eliminating suspects. Henry eliminated Malachi (Graham Greene); Walt eliminated Chance Gilbert (Peter Stormare). But now Henry’s trial has been moved up by two weeks.

Branch is still not himself; he stole a rifle, and broke out of his father’s house. Though it seems like he’s ruined every opportunity of ever returning as a productive lawman, I feel Jacob Nighthorse or David Ridges have been drugging him all this time.

Now that Vic’s husband has served divorce papers on her, the pressure is off and she can just continue to fill the role of a trusted and competent law enforcement officer and back-up Walt. If you’ve read Craig Johnson’s books, Walt and Vic have a romantic relationship and in the last one I read (A Serpent’s Tooth: A Walt Longmire Mystery, Book 9) he proposes to her.

At the conclusion of Counting Coup, Walt finished off David Ridges, even though Ridges thought he was a time traveling warrior and couldn’t be killed. My question is did Jacob Nighthorse call Walt to tell him where to find Ridges so Walt could finally take him into custody; or, did Nighthorse tell Ridges to kill Walt? Especially since it was Ridges that drove away in Walt’s truck and then came back on the horse. Either way, Nighthorse wins. For now anyway.

The photo (above), is from the final episode. Doesn’t say much, does it? But I’ve heard nothing but good things about this season of Longmire. It’s received high marks all around. I’m expecting an announcement of a Season 4 during the finale.