Not only are they playing new episodes of The First 48, they’re in a new city. Thursday’s episode (August 4) was in Mobile, Ala. Since I’ve seen every episode, I don’t think they’ve ever been in Mobile, or I would have remembered the fact that Mobile is the city with the oldest Mardi Gras.

Mobile, is a very intriguing city, with talented and interesting homicide detectives (and they all seem to have a sense of humor). Their motto, or at least the one on their coffee cups is “Homicide, our day begins when your’s ends.”

The other interesting thing I noticed about Mobile, and it could just have been the case they were working, or this particular murder victim, but when the detectives were looking for witnesses, I never once heard, “I didn’t see anything,” or I don’t know nothing,” I didn’t hear nothing.” Mobile citizens were calling the police to give them information.

With the information from the community and armed with what they find on Facebook – yes, Facebook, they track one of the killers down in the first 16 hours.

What follows is nothing short of hysterical. Just when they’re going to call it a day, a tip comes in about where their suspect is and they find him hiding at his grandmother’s house. They finally convince her to come to the door, she continually denies that he’s even in the house, yet he can be seen through the windows. They get her out of the house, they go in and get him. Now they stay at the house while they wait for a search warrant, and poor grandma has to sit in her front yard while all this goes on.

Once the criminal is in the interrogation room it starts at “I didn’t kill anyone,” to “It was just a robbery,” and when they get sick of hearing that, Det. Nettles shames the guy into crying. But the guy’s only crying because he knows he’s caught and he doesn’t know what to do or say to get out of it. What a wimpy, cry baby little twerp. Hardly worth time and trouble. When he finally calms down and says he want to talk, he says “Zebbie killed him.”

They hit the streets to find Zebbie, but they don’t. So, it’s finally time to eat. Back at the station, they hear from a relative of Zebbie’s, and get him in custody.

This episode ends with Zebbie also going into custody for the murder.

A different city with homicide detectives who get the job done. Three out of every four homicides in Mobile get solved. Higher than the national average.

Recently I heard that the founder of Facebook, Mark Zuckerberg, may be considering a run for President in the near future. I wonder if he’ll use Facebook crime statistics as a part of his platform. 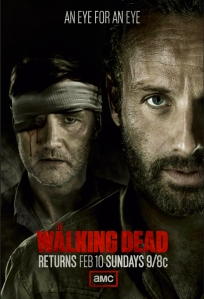 It’s getting closer … February 10 … the day the Walking Dead returns to AMC. Click on the link and you’ll see the Walking Dead midseason premiere poster with the tagline “An Eye for an Eye.”

Also on that page there are some links to the Top TV Moments, including Lori & Shane’s deaths and E! Names Danai Gurira Breakout Star. (I would too just to keep from getting chopped up into little pieces.)

They also have this new Dead Yourself App for iPhone and Facebook, but when I tried to put the link into the blog, it kept putting my Facebook credentials in and I wasn’t too happy about that. So if you want to make yourself into a zombie (for fun) of course, you’ll have to check it out for yourself at DeadYourself.com.

But brace yourself and don’t have an accident when you go to that website (DeadYourself.com) because it’s actually quite scary.

Of course I have the luxury of sitting on my couch, being an arm-chair profiler as this horror in Newtown, CT plays out. But I’ve gone through more than a half a box of kleenex, watching the coverage on MSNBC. This makes eleven senseless mass shootings in 2012. Two of those mass shootings where in my hometown: the Sikh Temple shooting in Oak Creek and the Azana Spa shooting in Brookfield.

I’m relying on the profiling classes I’ve taken (not criminal profiling, just human profiling) and this is why I’m offering you this theory.

1) His mother was his first victim and killing her was very personal; 2) He shot her in the face, point-blank and she was so badly disfigured, the authorities had to make positive identification some other way; 3) Adam tried to buy a rifle, but was refused, so instead, he went after his mother’s guns and she was passionate about guns. She took both her kids to gun ranges and her passion rubbed off on, if not both of her sons, at least on Adam. She probably taught Adam all about guns and probably taught him how to shoot and care for weapons. In the end, it was her downfall. 4) She had issues with the school district, her sister-in-law said and even home schooled Adam; 5) Out of the 26 victims, only 8 of them were male. All of the adult victims were female. 6) I believe the authorities have Ryan Lanza cloistered somewhere and are using the interviews to build a psychological profile of Adam; 7) We have not heard anything about the father of Adam Lanza; 8) I’m not sure why he would be caring his brother’s ID on him except that he was offering a clue as to who knew him and the reasons behind what he was about to do.

Now here are some facts about mass shootings:

What irritated me was within minutes on Friday, someone had created a Facebook page under Ryan Lanza‘s name, associated an incorrect picture with it and people had already started to praise him or call him a coward. Facebook will not take this page down and will not use its powerful software tools to block it or stop it. If telephone companies can monitor a phone number and make a “challenge” when someone continues to misdial it, then Facebook should be able to rise above their billions in stock earnings and become a good citizen and start taking down tasteless pages made for mass murders, stop child pornographers from finding victims and keep people from using breasts of 14 years old girls as their profile picture. 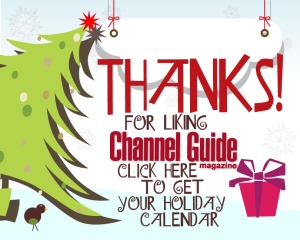 Kids bothering you while you’re trying to bake holiday cookies? Have they been out of school too long and Christmas is still a week away?

Do you need to know how many more times A Christmas Story is on before you actually sit down and watch it with the family?

When did they say the Royal Pains wedding special was on?

Are you looking for a comprehensive guide to all (or at least most) of the holiday programming? Just go to Facebook and find Channel Guide Magazine. Once there, you’ll see a button like the one above. Click on it and you’ll be taken to a link to download your Free Holiday TV Calendar. No frills, just holiday programming from Sunday, Nov. 18 through Tuesday, Dec. 25.

This handy 2-page calendar is just what you need to get everyone towing the line in your house this holiday season.

Go now and while you’re there you can examine the benefits a subscription to Channel Guide Magazine has to offer.