Last nights episode of The Following was an excellent follow-up to the premiere. It’s a good sign when the second installment of a series leaves you begging for more instead of a) leaving you flat or b) asking yourself “now was that episode 3 or 4?”

The Following is one of those shows where a commercial comes along, you look at the clock and you think it’s half over and only 15 minutes have gone by and realize you’ve been sitting on the edge of your seat the whole time. Yes, it’s getting that good and will be getting better.

I signed into my imdbpro.com account this morning to check the credentials of some of the actors of The Following and of course the talking heads are “talking.” People take television so seriously. In the “News” feed, Vulture.com interviewed this English professor about the hard-on Joe Carroll (James Purefoy) has for Edgar Allan Poe in the series (see the link below).

Personally, she should be asking that question of the writer(s) and creator of The Following, not an English professor who knows about Poe. Especially when the English professor says that the most accurate TV/film adaptation of Poe in recent years has been The Simpsons (well at least it’s still in the “Fox” family).

I wonder how much Gwynne Watkins knows about Edgar Allan Poe? Well she seems to be very well educated and well written. However her Twitter biography includes two words that says it all – professional overthinker. Ah ha, there lies the problem. It’s television people, we’re not teaching an online class, we’re trying to entertain people.

So it’s up to you if you want to read Gwynne’s column or … not. My advice is to set your DVR and not miss any more episodes of The Following. If you have missed any, you can go here: http://www.fox.com/full-episodes/ and catch up.

This tidbit of trash happened to show up on the front page of imdb.com on Monday when I was reading about Ben Affleck winning a Golden Globe for Argo.

A few posts back, I wrote about Argo and posted a link to the article that was the story behind the movie. In the past few weeks I’ve read several arguments where others have compared Argo to Zero Dark Thirty (ZD30), mostly because they both deal with our enemy(ies) in the Middle East.

This particular article (link) really pissed me off (please excuse my language). So much so that I actually posted a comment at imdb.com, which I don’t do often. [Comment: What about all the films that condone senseless gun violence that no doubt led to some of the nuts committing mass murder? It’s okay to show those but not to see ZD30? What a hypocrite!]

David Clennon is an American actor, who has an extensive resume of TV and movie work. He, as an Ampas member, would not be voting for Kathryn Bigelow’s film, which has been nominated for five Oscars, because it “promotes the acceptance of the crime of torture, as a legitimate weapon in America’s so-called War on Terror.”

Many, including other Ampas members are outraged that he would use his status as an Ampas member to speak out this way against a film and attempt to influence the voting process.

His comment has seriously offended me, not near as much as seeing thousands of Americans die at the hands of TERRORists on September 11. (Which was real and not being portrayed in a film.)

With Newtown, CT just passing its one month anniversary and President Obama already in a skirmish with the Washington elected officials regarding new laws on gun control, I commented on imdb.com that David Clennon should have been exercising his “veto”  long ago and boycott films that promote and glorify films with blatant gun violence (the 2012 films alone are way too long to list).

What do you think?

When The Lord of the Rings: The Fellowship of the Ring came out in 2001, I accidentally saw it in Albuquerque on New Years Eve confusing it with that movie about the boy wizard. Well of course seeing the first one, I had to see the other two to find out how the story ends.

Of course the beautiful New Zealand countryside, wonderful music and story of the ages were just residual benefits, along with the fantastic acting.

So when The Hobbit: An Unexpected Journey came out before Christmas this year, I knew I’d see it. There are some movies you want to see on a big screen and that’s one of them so I went and saw it on a regular screen (not 3D) over the New Years holiday. There were maybe 15 people in the theatre and since I work in the field of movies and television I already knew that this was the first of three films, which didn’t bother me.

I truly enjoyed The Hobbit, even more so than The Lord of the Rings Trilogy. It has the same beautiful countryside, fantastic music (I downloaded the soundtrack today for my iTunes) and timeless story. It has already made $223 million in the US and remains at #1 since it’s release on December 13.

And it’s about Dwarves, and handsome ones, too. You should catch it in the theaters before it’s gone.

The Dwarves from The Hobbit: An Unexpected Journey

I remember when new shows and new seasons only came around once a year and that was in the Fall. Of course I grew up in a very small town (Stevens Point, Wisconsin) and we didn’t even have a McDonald’s when I left in 1975.

Here at Channel Guide Magazine we celebrate with a midseason issue, but there’s nothing like IMDb.com for an entire list of midseason premieres.

This one is particularly nice since you can view the list in a variety of ways: Title A-Z, List Order, US Release Date, # Ratings, IMDb rating, MOVIEmeter and date added. You can also change the view.

The list was created a month ago, but you can bookmark the page and check back for updates as premiere schedules are announced. Right now there are 81 titles on the list.

You’re looking at the regular IMDb.com page. If you have an imdbpro.com account, you can even copy specific items to your list. In the meantime, enjoy it.

If a particular show you’re looking for, like The Following, starts with the word “The”, you’ll have to look for it under the “Ts.” Speaking of The Following, that’s one show you  might want to add to your DVR settings.

I really don’t enjoy “pressing” articles from other news sources, but I find that The Hollywood Reporter is far less “sensational” as some. I came across this particular article when I was on imdb.com this afternoon (Friday, Oct. 12).

I find in interesting that Mitt Romney has again found himself with his foot in his mouth once again. 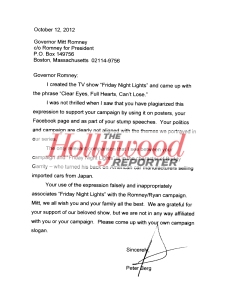 The letter to Mitt Romney from Peter Berg