Here’s some Walking Dead video fun in case your craving is getting the best of you. I know I had a hard time on Sunday realizing there wasn’t anything worth watching at 8pm except reruns. Thank heaven for my DVR (how many times have you heard me say that?).

There are several videos here, some as long as six minutes, with behind the scenes action. Watching most of them at least whet my appetite some.

Remember, AMC will be showing all three seasons of The Walking Dead starting New Years Eve Day through New Years Day. Just think what a great party theme that would make. If I were you, I’d start googling for recipes right now.

As I mentioned many posts ago, the Talking Dead is a “guilty pleasure” you should indulge in after watching The Walking Dead. Both on-air and on the web, the show is 30 minutes (counting commercials) plus there’s another 18 minutes of commercial free video on the web (http://www.amctv.com/talking-dead).

As promised, I won’t write spoilers or recaps on shows, but I must say, episode 304 (which in episodic TV speak is Season 3, episode 4) of The Walking Dead was a real WOWer! I was falling asleep in the last 10 minutes of it and in my sleeping stupor I heard little snatches of things … “but she’s my mother.” So when I woke up the next morning at 4:45am I quickly made my morning cup of joe (good and strong), grabbed my DVR remote and zipped it to the last 15 minutes of the episode and quickly watched the ending.

Just for reference, only the bonus segments of Talking Dead are on the website, not the television portion, but trust me, the bonus segments are much more up our baby boomer alley than the television portion. In the bonus section that the link above leads to Chris Hardwick (the host) challenges his guests (IronE Singleton (T-Dog) and Gale Anne Hurd (series producer)) to a game. What ensues is quite funny and wouldn’t be allowed on regular TV. Ah, the joy of cable!

Now don’t forget to click the link above and have a good laugh while you watch the bonus segment of The Talking Dead. And make it one of your guilty pleasures along with The Walking Dead, every Sunday at 9pmET on AMC. 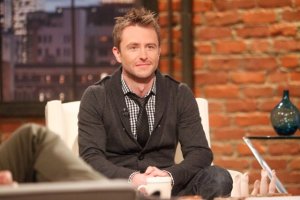 Chris Hardwick is the host of The Talking Dead on AMC.