Born in Ehrenfeld, Penn., one of fifteen children, born to Lithuanian parents, in a Pennsylvania coal-mining town, Bronson knew what poverty was at a very young age. By the age of 15 he was working fourteen hour days in the coal mines, earning $1 for a ton of coal.

World War II gave him a chance to become a B-29 tailgunner while based in Guam. When the war was over he found himself in California as an out-of-work actor. He lined-up day-after-day with the rest of the hopefuls at Paramount Studios at the Bronson front gate. It was there that he got the idea to change his family name to Bronson and his career soared.

He was the quintessential tough guy with weather beaten features and was often cast in the role of police officer, gunfighter or vigilante in revenge-oriented plot lines. In 1967 he got a part in The Dirty Dozen (1967), directed by Robert Aldrich, starring Lee Marvin and Ernest Borgnine. 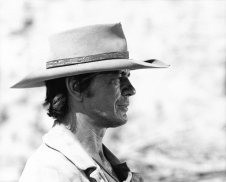 Harmonica from Once Upon A Time in the West

My favorite Bronson part was “Harmonica” in Once Upon a Time in the West (1968), directed by Sergio Leone, a 2-1/2+ hour film with a haunting musical score by Ennio Morricone. He was 47 when he made that movie and looked 25.

Other movies he made “famous” included The Great Escape, The Magnificent Seven and five Death Wish films. The franchise began in 1974 and ended twenty years later in 1994. He was 73 at the time. He would die nine years later of pneumonia.

He married Jill Ireland in 1968, after her 1967 divorce from David McCallum (McCallum introduced her to Bronson on the set of The Great Escape). They had two children, one born to them and one adopted. She was diagnosed with breast cancer in 1984 and underwent surgery. She died on May 18, 1990. She was only 54.

Though some of his films had a more violet tone, and he was cast as an avenging angel eradicating crime, he surprised critics with his forceful work as murdered United Mine Workers leader Jock Yablonski in the TV movie Act of Vengeance and gave an interesting performance in The Indian Runner directed by Sean Penn.
His final roles in several crime/drama TV movies were well-received, but his bad health began to take its toll. He suffered from Alzheimers disease and finally passed away from pneumonia in August of 2003.
Critics not always loved his films, but he was a true fan favorite in the United States and abroad for over 50 years. There aren’t a lot of actors who can claim that.