No … not The Walking Dead, AMC’s soap opera about zombies … I’m talking about the comic book.

Do you get TWDM (The Walking Dead Magazine)? It’s like a perfect seque of comic and television show. If you’re not a comic person then it’s a perfect publication for you.

It was during my first initial read of Issue #7 that I came across the youtube video The Walking Dead: A Decade of Dead. It’s a documentary detailing the history of The Walking Dead. It runs a little over 22 minutes. Trust me, there’s so much to learn, you won’t be sorry.

In Issue #7 there are interviews with Sarah Wayne Callies (Lori Grimes), Robert Kirkman and Stefano Gaudiano. Stefano is the new comic book inker, and I’m sure you know who Robert Kirkman is, don’t you? (Watch the video.)

Plus the usual Favorites, Head Shots and a regular fun column called, what else, “Body Parts.”

Now that The Walking Dead television show is into the back 8 episodes of Season 4, The Talking Dead has returned. If you’re not watching The Talking Dead, you just don’t know what you’re missing. Humor, interviews, insight into the actor’s craft as they take you through the process of the episode that just aired.

Chris Hardwick mentioned that he was happy to be back after the mid-season break. Greg Nicotero and Danai Gurira were the featured guests and pudding was on the set. That’s about all I’m willing to say, because I don’t like to “spoil” in my blog posts.

I’ll spoil this though – The Walking Dead will be back for a fifth season.

Dispatches from the Set – Mike Satrazemis Director of Photography.

A recent sales flyer from tfaw.com

I hope you enjoyed the 4+ minute Comic-Con trailer. I’m so anxious for Season 4 to start, I had my own Walking Dead marathon several weeks ago. I was up in Door County over the July 4th holiday when AMC held their Walking Dead marathon and didn’t realize that my DVR had recorded all the episodes.

I bought Season 1 and Season 2, so I wasn’t worried about it, but was overjoyed when I realized that my DVR had actually recorded all the episodes, including the black and white Season 1 episodes, which I found extremely hypnotic to watch.

So I watched the black and white episodes and deleted the rest of Season 1 and 2 and took my time and reviewed Season 3 at my leisure. I decided the episode where Merle is shot by the Governor and Daryl goes to find him and discovers he’s turned into a zombie is one of the most powerful of Season 3, only topped by little ass kicker’s emergency birth.

I recently received #113 of the Walking Dead comics, anxiously awaiting #115. I get both the comics and The Walking Dead monthly magazine from http://www.tfaw.com (Things from Another World). #115 will be available in 12 covers. The biggest storyline in Walking Dead history will be arriving just in time to celebrate the 10th anniversary of the series (this is the comic book I’m talking about now). When #115 ships in October, it will increase comic book delivery to twice a month, instead of just one Walking Dead comic a month.

In the comic world, it’s all out war as the survivors from Alexandria, The Hilltop, The Saviors and The Kingdom duke it out. Covers B through K form an interconnecting image! And realize this Walking Dead fans, many of those who have perished in the television show are alive and well in the comic book world.

So if you want to keep your Walking Dead hunger fed, consider feeding it with comics and the monthly magazine (no pun intended).

It’s Friday, Dec. 21 and I have four days off in a row. Imagine, I don’t have to get up with the alarm clock for four days.

And then it’s back to work and then more days off! Plus I always take a vacation day after a Holiday which means I’ll be off on the 2nd of January which leads me to why I’m writing this post.

Starting on Dec. 31 and continuing through Jan. 1, AMC will be running all episodes of The Walking Dead. A perfect opportunity for you to get caught up with everything before new episodes return on Sunday, Feb. 10 at 9pm/8pm CT.

Lori Acken from our office interviewed Steven Yeun (who plays Glenn Rhee) this week and asked me for questions. I was honored.

One of the questions I gave her to ask him was if he had any recipes to recommend in case someone was planning a New Years Eve/Walking Dead Marathon party. I’m not sure if she asked him that, hence, not sure if he recommended any recipes, but I’ve got a helluva cream cheese and olive chip dip recipe that’s been in our family going on 50 years or more, if you want that.

The link I have for you is perfect if you’re New to the Show … because that’s exactly what the link is! Have fun … oh and if you want that chip dip recipe, leave me a comment with your email address and I’ll send it right along. 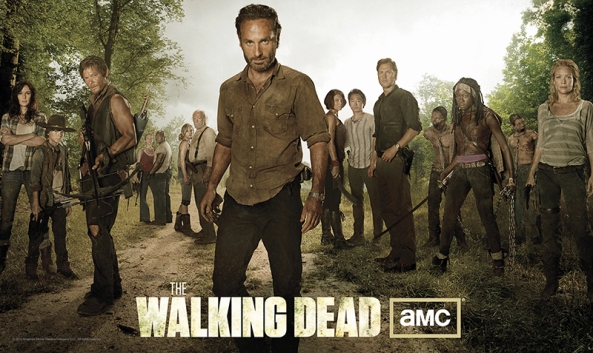 Here’s some Walking Dead video fun in case your craving is getting the best of you. I know I had a hard time on Sunday realizing there wasn’t anything worth watching at 8pm except reruns. Thank heaven for my DVR (how many times have you heard me say that?).

There are several videos here, some as long as six minutes, with behind the scenes action. Watching most of them at least whet my appetite some.

Remember, AMC will be showing all three seasons of The Walking Dead starting New Years Eve Day through New Years Day. Just think what a great party theme that would make. If I were you, I’d start googling for recipes right now.

Wow! is about all I could say once I read this article.

If you’re not watching The Walking Dead yet, why not? Just take a look at the list of “Tags” I put in for this post and that should give you an idea of how many media outlets have been commenting POSITIVELY on The Walking Dead. Just one of their episodes turns in millions of viewers, the kind of numbers some series would be happy to have for an entire season.

Here are two teasers from the article above:
Adweek‘s short list of the hottest media properties includes The Walking Dead in the “Best reason to watch TV now,” “Biggest social butterfly” and “Show that keeps you on the edge of your seat” categories.

TV by the Numbers reports that last week’s episode was the highest-rated cable show on Sunday, recording a rating of 5.6 in the 18-49 demographic, up from from 4.9 last week.

The Walking Dead premieres on AMC Sunday, Oct. 14 9/8C (not available on DISH)