Casey Kasem created the music radio program “American Top 40.” He was the voice of Shaggy on my favorite cartoon show, Scooby-Doo. 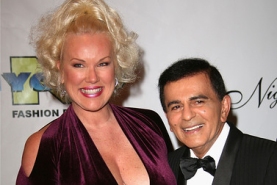 Kasem never really cared for one type of music over another. But he knew his subject and he knew his audience and kept up with it like a top selling salesman. Hit singles in various genres came and went, but it was Kasem’s delivery and regular-guy appeal that brought listeners back to their radios time and time again.

“What really matters,” he said, “it what I say between the songs,” he said. Many likened his comfortable, on-air ways to that of soft slippers; his relentless upbeat outlook to life, the close of every show: “Keep your feet on the ground, and keep reaching for the stars,” a little bit corny.

In 1988 his relationship with American Top 40 ended due to a contract dispute. The next year, he started Casey’s Top 40 on another network and brought a good portion of his old audience with him. Ten years later he had secured the rights to the name and again hosted American Top 40.

In 2004 he handed hosting duties over to Ryan Seacrest, but remained in the background, writing and producing. In 2009, Kasem quietly retired on the 39th anniversary of his first Top 40 program.

Kasem had been diagnosed with Lewy body dementia in 2007. Lewy body dementia is a degenerative disorder of the central nervous system similar to Parkinson’s disease. In 2013, when his health had deteriorated to the point he was unable to care for himself, a bizarre feud erupted between his second wife (Jean) and the children of his first marriage. It began when Jean refused visitation to his children, to see their father.

In May of 2014, a court granted Casey’s daughter Kerri (42) conservatorship over her father, which included the right to make all medical decisions on his behalf. The  problem with that was that nobody knew where he was. Jean had moved him from a nursing home several days earlier and was hiding him. “He was no longer in the United States,” she told the court.

Several days later, however, he was found in Washington state, unresponsive. Kasem died two week later. Jean had the rights to Kasem’s body, and she collected his remains from a hospital in Tacoma, Wash. But a month after his death, he still remained unburied in a nearby funeral home. A few days after that, his body went missing from the funeral home.

A representative for the family became involved and stated that Jean “is hiding him from authorities and is hiding the body away from family and friends.” His daughter Kerri lobbied through the Kasem Cares Foundation for legislation in the California state senate that would grant visitation rights to adult children with an ailing parent.

The rep stated, “they just want their dad to be buried where he wanted to be buried – Forest Lawn [in Glendale, Calif.]. They’d like to be able to visit him.”

Jean had Kasem buried in an unmarked grave at Oslo Western Civil Cemetery in Norway, a country where Kasem had no relatives, ties, heritage and had never visited. He lies there alone, and where he will most likely spend eternity.

But the real “battle rounds” seem to be going on over at FOX with the American Idol judges. If you haven’t been paying attention, and it’s hard not to, Nicki Minaj has threatened to shoot Mariah Carey. On Friday I listened to some of the recorded cat fight between the two and I think Nicki Minaj was channeling a long-dead sailor, if I was deciphering the swear words correctly through the beep, bleep bleep, beep, bleeeeeeeeppppp.

What I found strange is the number of cameras recording this “cat fight” leading me to believe that this entire situation has been scripted.

From the Guardian Express Newspaper … “But no matter how it might appear producers are not happy about the disruption, you better believe that secretly they’re hoping it continues to get increasingly dramatic. Why? Because drama sells, period. A spokeswoman for FOX and Idol declined to comment on the reported dust-up between the two stars, but another source — close to fellow judge Keith Urban — said the country music mainstay was particularly unhappy about the tension. “Keith is such a wonderful, easygoing, lovely guy,” said the source. “This kind of drama was not the reason he signed on to be an Idol judge. … He hates nastiness in any form.”

American Idol host Ryan Seacrest said Wednesday (10/3) on his radio show that he loves the bickering. “Idol needs some passionate debate. It did get intense. We want that. … The feedback that they give is very good.”

Kelsea Stahler of Hollywood.com Staff wrote on Friday, Oct. 5 … the series (Idol) is dangerously close to losing what’s left of its identitly. “If this nonsense between the two diva judges continues, Idol may steer into becoming a documentary-style reality show parading as a talent competition – a fate it’s been teetering on since Season 9 when the celebrity judge trend had its first shaky start.”

In the video you can hear Minaj verbally jab at Carey “… if you say one more disrespectful thing to me – off with your head!” while Carey simply asked “Why?” and compares Minaj to a young child.

Barbara Walters revealed on The View that Mariah Carey shared some of the fight with her backstage including that multiple people heard Nicki say “If I had a gun I would shoot the bitch,” said Walters.

Nicki Minaj is on your left (with the cotton candy looking hair) and Mariah Carey is on the right. This picture was taken approximately 4-5 days ago.

So American Idol has produced some stars, and some who never won but went on to stardom – such as Jennifer Hudson, who came in 7th in the third season and then went on to win an Oscar for Best Supporting Actress, a Golden Globe Award, a BAFTA, an NAACP Image Award and a SAG Award.

I don’t think there’s a current American Idol winner with those credentials.

Which is why I watch The Voice.