Do you ever read the comments people (and fans) leave after an article written about one of your favorite shows?

I was just reading an article about Criminal Minds‘ Final Season (CBS). It was on the website Deadline. It was written in January of 2019. It was mostly accurate. What’s really bad and deserved follow-up is the stupid comments made about the article by the fans who read the article and the misinformation that’s left behind. 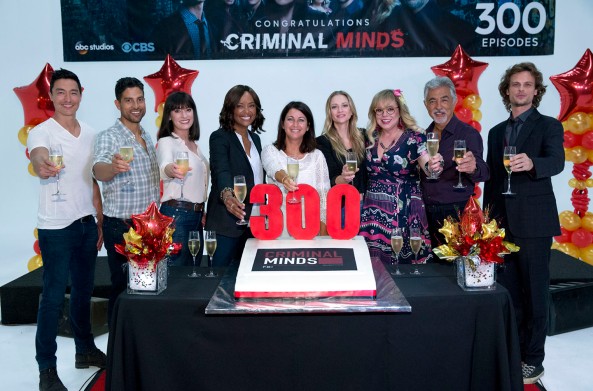 The cast of Criminal Minds celebrates its 300th episode.

The author mentions that Season 15 might bring back former cast members and talks about some of them that departed over the years. She lists Mandy Patinkin, who they kill off in Season 10, Episode 13 (“Nelson’s Sparrow”). It’s one of the best episodes, co-written by Kirsten Vangsness and actually depicts how the BAU started with Gideon and Rossi. The killer of Patinkin is from one of their first cases.

Some of the commentors latch on to this and make stupid remarks about “what are they going to claim he really didn’t die and he’s been in witness protection the whole time.”

The writer also mentions Thomas Gibson, who personally, I loved. I was sorry when he left the show two episodes into Season 12. The comments, again, had him kicking a “writer” when actually, he was fired following a two-week suspension for a physical altercation with writer/producer Virgil Williams. It wasn’t his first time he had problems with the filmmaking side of the staff. If you remember, he was absent before in Season 11 for an episode. He apparently had to attend mandatory counseling for a similar problem.

And some people claim it’s their favorite show, but aren’t up on the details! Here are some FACTS you should make yourself familiar with: Hotch is no longer in witness protection (many, many people assume he still is), Edward Allen Bernero was NEVER a writer, Andrew Wilder was fired for cause because he was abusing pain medication, you can read the entire interview here (https://criminalmindsfans.com/exclusive-interview-andrew-wilder-talks-criminal-minds/), he even says “He’d fire himself” , Kirsten Vangsness co-wrote Episode 18/Season 11 “A Beautiful Disaster” which was directed by Matthew Gray Gubler, Virgil Williams wrote the Episode 19/Season 11 called “Tribute” which was Derek’s good-bye and Breen Frazier wrote Episode 16/Season 11 called “Derek” directed by Thomas Gibson.

Remember the episode about the young boy who tracked down Reed because he had visions of killing prostitutes – that was Episode 11/Season 2 entitled “Sex, Birth, Death.” His name was Anton Yelchin. He played Chekov in the Star Trek movies. He died June 19, 2016 in a freak car accident. He was only 27 and a promising and gifted actor. It made me very sad.

So next time you, as a fan, want to toss out a comment about your “favorite” show, please do a little research first. Go to wikipedia and read some facts about it. But please don’t rely on what’s bouncing around in that head of yours. It’s really embarrassing to real fans of Criminal Minds.

March 30: Phil Ramone, 79 – music producer and innovator, a former violin prodigy and expert engineer. He worked with Dylan, Sinatra, McCartney, Bennett, Charles, Streisand, Simon, Joel and Bacharach and spent more than50 years in the music business. He won 14 Grammies and was nominated 33 times and was once dubbed the “Pope of Pop.”

March 25 – Scott Hardkiss (born Scott Friedel), 43 – Bay Area DJ and 90s Rave pioneer and founding member of Bay Area trio the Hardkiss Brothers died. He suffered from a degenerative eye disorder Keratoconus and underwent eye transplant surgery to restore vision in his left eye in 2011 but the surgery was unsuccessful. Keratoconus is not known to be fatal and very little information is known about the cause of Hardkiss’ death.

March 24 – Todd A. Breitenstein, 47 – Owner (along with his wife) of Twilight Creations, a gaming company, best known for “Zombies!!!”

March 19 – Harry Reems, 65 – The man who brought pornography to mainstream audiences, died at the veterans’ hospital in Salt Lake City, Utah. He had been diagnosed with pancreatic cancer, his wife, Jeanne Sterrett Reems said. Reems became famous for his role in the adult-film classic “Deep Throat” which brought middle class audiences to the theater and became a forerunner of today’s hardcore adult-entertainment industry.

March 16 – Bobby Smith, 76 – Co-founder and long time co-lead singer of the legendary  Spinners, died from complications of influenza and pneumonia. He had also been diagnosed with cancer in the fall of 2012.

March 15 – Olen Burrage, 82, suspect in the 1964 Klan slayings. No cause of death was given. Burrage owned land in Neshoba County in central Mississippi where the three civil rights workers were buried in an earthen dam after the Klan members murdered them in 1964. He was acquitted of conspiracy in 1967.

March 11 – Robert Troyan, 63 – An American socialite living in London was found dead from head injuries at his Mayfair flat. He was the first person in London to enter a civil partnership. His partner, Anthony Feldman, a renowned architect, interior designer and com poster, died of pancreatic cancer in 2005. The pair had been together since 1983 and entered into a civil partnership just one month before Feldman’s death, becoming the first couple in the capital to do so. The police have launched a manhunt to find who beat Robert Troyan.

March 11 – Erica Andrews – Mexican-born American drag performer, Miss Continental (2004), long ailment. Renowned for her unique routines including her Mommie Dearest boardroom/Shirley Bassey mix to “I Who Have Nothing,” her many titles include Universal Show Queen (2004), Miss Gay USofA (1999) and Miss Continental (2004). She was also featured in the 2006 Showtime documentary Trantasia and had a role as Emma Grashun in the 2010 revenge-horror-exploitation opus Ticked-Off Trannies With Knives. She was often referred to as “the most beautiful drag queen in captivity.”

March 9 – Sybil Christopher, 83 – the wife that Richard Burton left for Elizabeth Taylor died, from an unknown cause. When married to Burton, they had two daughters, Kate Burton – a successful actress currently starring in ABC’s “Scandal” and Jessica Burton, who suffered from autism. Following the media circus of her break-up with Burton, Ms. Christopher reinvented herself, moved to New York and opened a Manhattan nightclub called Arthur (named after George Harrison’s hair style). For the next several years, there was no hotter discotheque in the city and it transformed Sybil into a celebrity. In 1966 she married Jordan Christopher, 10 years her junior, the lead singer of the Arthur house band The Wild Ones. He died in 1996. They had one child.

March 5 – Hugo Chávez, 58 – Venezuelan politician and military officer, President (since 1999), cancer. Mr. Chávez had been seriously ill with cancer for more than a year, undergoing several surgeries in Cuba. He was a controversial figure in Venezuela and on the world stage, a critic of the US, he inspired a left-wing revival across Latin America.

March 5: William ‘Paul Bearer’ Moody, 58 – the pasty-faced, urn-carrying manager for performers The Undertaker and Kane of the WWE, died on Tuesday, March 5.

March 3 – Bobby Rogers, 73 – Co-Founder of The Miracles in 1956 with Smokey Robinson, his cousin Claudette Rogers, Pete Moore, Ronnie White. The Miracles were inducted into the Rock & Roll Hall of Fame in 2012 after recording hits including “I Second That Emotion” and “The Tears of a Clown.” Rogers had been ill for several years.

March 1 – Bonnie Franklin, 69 – The veteran stage and television performer who became a well-known star after playing the divorced mom Ann Romano on “One Day at a Time” died at her home in Los Angeles due to complications from pancreatic cancer.

March 1 – Jewel Akens, 79 – R&B crooner whose song “The Birds & The Bees” vaulted him into short-lived fame in the mid 60s, died of complications from back surgery in Inglewood, as told by his wife, Eddie Mae.

I did not have a good day today. I was checking Wikipedia’s 2013 Obits when I discovered that Allan Arbus died. He was 95. He played the Psychiatrist on one of my all-time favorite programs – M*A*S*H, of which I’m a trivia expert.

I could dazzle you with my memories of him, but the one that really stands out is in the final episode of M*A*S*H – Goodbye, Farewell and Amen. It surpassed the single-episode ratings record that had been set by the Dallas episode that resolved the “Who Shot J.R.?” cliffhanger (which you wouldn’t catch me watching).

In the final episode, Hawkeye (Alan Alda) is in a mental hospital after suffering a nervous breakdown and Dr. Sidney Freedman (Allan Arbus) is there treating him. If you’ve never seen the final episode, I’m not about to ruin it for you, so you’ll have to take my word that it certainly outshines Who Shot J.R.

The link above will take you the NYTimes.com obit of Allan Arbus, and in the middle there’s a link that says … Alan Alda, who played Hawkeye, recalled Mr. Arbus as a very believable therapist. Click that link and you’ll be whisked away to a YouTube video of Alan Alda saying that it took him a while to remember that Allan Arbus was NOT a real therapist.

More times than not, I have said I should be a TV critic. The First 48 was a winner in my book from the first episode. I haven’t missed an episode since it began. I own both “Best of … ” DVDs and it’s part of my Thursday night ritual along with popcorn and cuddling up with my chiweenie Buddy.

According to Wikipedia, “as of the August, 2011, end of its 11th season, A&E has aired 180 episodes of the series. By season 6, The First 48 had become the highest rated non-fiction justice series on American television, and had gained considerable critical acclaim along with controversy. The season 8 premiere on January 1, 2009, garnered a domestic audience of 2.3 million viewers making it the series’ most watched episode, thus far.”

The First 48 is a “reality show” in the truest sense of the word. I don’t watch The Bachelor (ick) or The Bachelorette (ick x 2) or Survivor (I will confess to playing the office pool).

From A&E’s website, it describes The First 48 like this: The biggest enemy for any homicide detective is not the suspect…it’s the clock. In fact, if they don’t find a lead in the first 48 hours, their chances of catching the killer are cut in half. The First 48 tracks real homicide detectives as they struggle to solve murder cases across the country. Gripping, authentic and dramatic, viewers are brought along for the ride as the detectives hunt for killers to bring to justice.

The First 48 has featured or plans to feature detective units in 23 US cities.

One of the most exciting season premieres of The First 48 featured Kansas City, Missouri. This two-hour premiere featured a serial killer case in the Prospect Avenue corridor. Terry Blair was eventually found guilty in the deaths of six women in 2008.

The case began with 911 cell phone calls to police on Sept. 3 and 4, 2004. The caller told police he killed two women whose bodies had just been found. He continued to call police and told them where to find three more bodies and had details only the killer would know.

For the whole story on Terry Blair, go here: http://murderpedia.org/male.B/b/blair-terry.htm

Dion Graham has narrated The First 48 from the very beginning. In all the episodes I’ve seen, I may have heard one that was not narrated by him and it was a slightly different format.